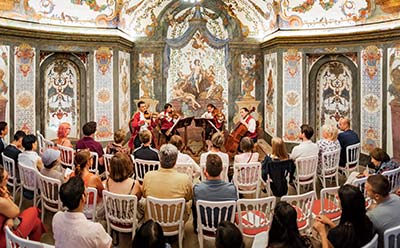 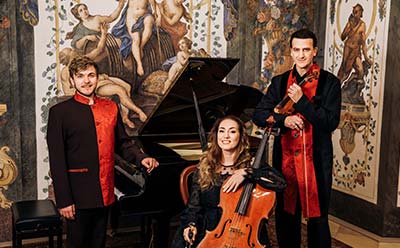 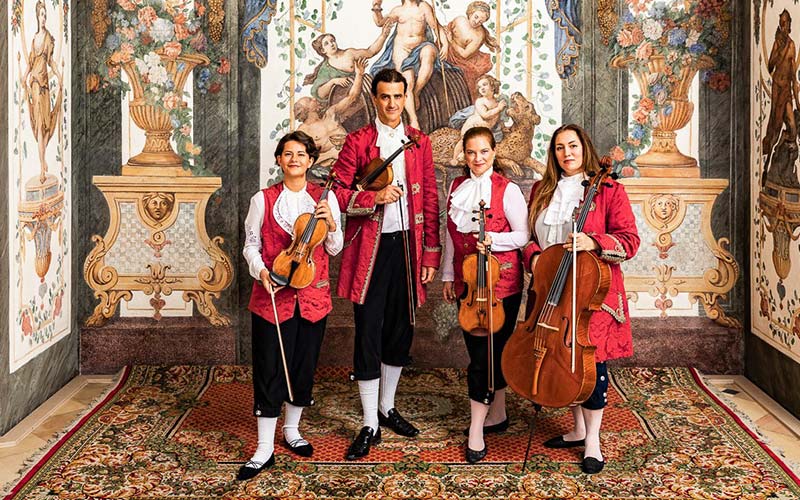 Ludwig van Beethoven's piano sonata "Sonata quasi una Fantasia per il Clavicembalo o Piano-Forte", completed in 1801, is now, as it was then, one of his most popular piano works.
With its formal freedom and its emotionally determined style, the sonata is considered an important forerunner of musical romanticism. Originally known as the Arbor Sonata - Beethoven is said to have improvised the first movement in an arbor - the work only received the popular name Moonlight Sonata after Beethoven's death.

The Love Dreams (German: „Liebesträume“) by Franz Liszt are three solo piano pieces from 1850, presented as art songs based on poems by Ludwig Uhland and Ferdinand Freiligrath.
Each of the three poems is about a different form of love. Love Dream No. 1, based on Uhland's „Hohe Liebe“ („Higher love“) is about the love to God – the „martyr“ renounces worldly love and „heaven has opened its gates“. Love Dream No. 2, after Uhland's „Seliger Tod“ („Blessed Death“), is about passion and erotic love – „I was dead from love's bliss; I lay buried in her arms; I was wakened by her kisses; I saw heaven in her eyes“. The final piece Love Dream No. 3, based on Freiligrath's "O lieb, so lang du lieben kannst" („O dear, as long as you can love“), the most well-known of the three pieces, is about unconditional love.

Joseph Haydn's string quartets, Op. 76, composed in 1796 and 1797, were commissioned by Count Joseph Erdoedy. These quartets are among Haydn's most ambitious and sophisticated chamber works, deviating more than previous quartets from the expected sonata form, and emphasizing thematic continuity, seamlessly and continually passing motives from one instrument to another.

The name Quints quartet is a reference to the perfectly well attuned fifths in the first movement at the beginning of the quartet. The outer movements are typically fast, the inner movements consist of a slow movement and a dance movement like a minuet, scherzo or furiant, in either order. The minuet in Haydn's Opus 76/2 became known as the Witch Minuet because of its supposedly bewitching quality.

The third movement of Sonata No. 11 in A major KV 331 is one of the most famous piano sonatas by Wolfgang Amadeus Mozart. Mozart wrote them in Vienna or Salzburg in 1783. Particularly popular is the third movement: an Allegretto in rondo form in A minor, entitled Alla Turca (Italian; „in the Turkish way“), which has become known as the Turkish March and is played on the model of Turkish Janissary music.

The Piano Trio No. 39 in G major by Joseph Haydn is probably Haydn's most famous piano trio and is known as “Gypsy Trio” because its final movement was written as a rondo „in a Hungarian manner”. Haydn used actual Hungarian dance tunes as a model here.

Wolfgang Amadeus Mozart composed his G major Serenade in 1787 and gave it the title “Eine kleine Nachtmusik“ (“A Little Night Music“) in his thematic catalog raisonné.
However, Mozart only called his last night music “small” because of the short dimensions of its movements; for in terms of sound, the work is more akin to those great forms that he also uses in his Viennese symphonies, string quartets and string quintets.

Four chamber musicians, experienced in playing solo as well as together, form the Vienna string quartet Mozart Ensemble Wien. Directed by Claudio Bentes at the position of first violin, the Mozart Ensemble Vienna has become an insider's tip for fans of Viennese chamber music. In the classic cast of two violins, a viola and a cello, the Mozart Ensemble brings to life the most beautiful works of the Viennese classic in all its nuances. With playful charm and nimble figuration, the string quartet plays a program with selected works of Joseph Haydn, Franz Schubert and Wolfgang Amadeus Mozart.

The four musicians of the Mozart Ensemble are masters of their craft. Tours and concerts have taken them across Europe and also to Japan and South America. Their performance is witty and electrifying, a privileged experience that makes you feel like an elite member of the imperial era.

The Mozart Ensemble Vienna plays divertimenti, serenades and selected string quartettes from the Vienna classical period, every Wednesday, Friday and Sunday at 19:30 (7.30pm) and Saturday at 18:00 (6.00pm). 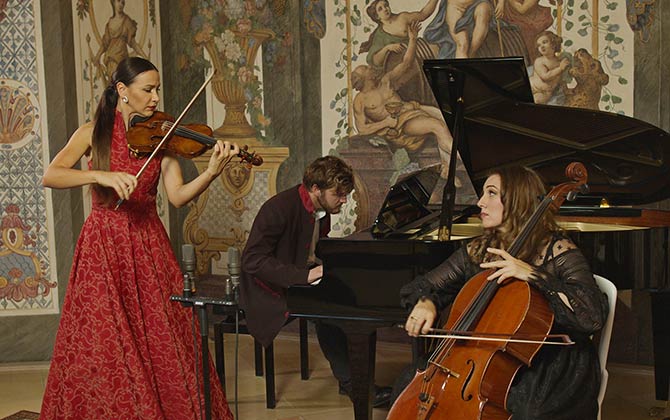 Let the Mozart Ensemble Piano Trio (piano, cello and violin) take you back to the glorious days of the Viennese classical period. Listen to selected works such as Ludwig van Beethoven's Moonlight Sonata, Franz Liszt's Liebesträume and Impromptus by Franz Schubert. Among the highlights of the program are the Piano Trio in G major Rondo All'Ongarese (Gypsy Trio) by Joseph Haydn and the Turkish March from Sonata No. 11 in A major (KV 331) by Wolfgang Amadeus Mozart.
The Mozart Ensemble Piano Trio performs on Tuesdays and Thursdays at 19:30 (7.30pm). 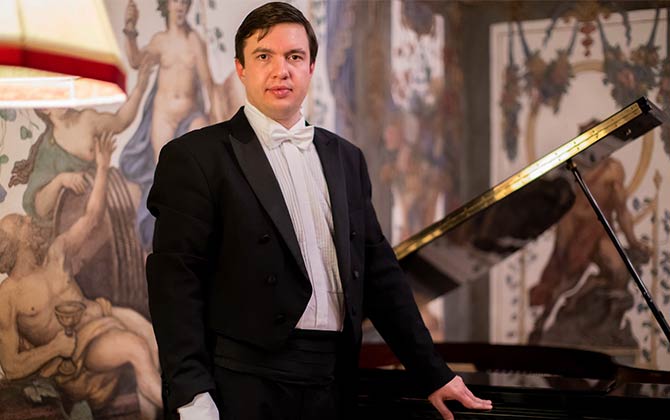 Enjoy a selection of the most beautiful piano works by Ludwig van Beethoven, Franz Liszt, Frédéric Chopin and other composers, played by internationally renowned pianists.
The Mozart Ensemble Piano Evening takes place every Saturday at 20:00 (8.00pm).

The concert hall provides a significant part to the concert experience. The Deutschordenshaus at the Singerstraße is an imposing building that somehow is not willing to fit into the inner city with its narrow alleys and mysterious yards. Contrasting architecture from different eras, which can also be found inside: the Gothic-style Deutschordenskirche was built between 1326 and 1375, the courtyard and the other wings of the building 300 years later in 1667. High rooms that seem to strive towards the sky alternate with narrow, oppressive passages. Then there is the concert hall in the style of the late Renaissance. Designed in the idea of a grotto, the Sala Terrena charms with its intimate atmosphere and colorful freskos and goes well with the Mozart Ensemble's graceful phrasing and awareness of structure, like musical equivalents of Vienna's ornate architecture and imperial atmosphere. 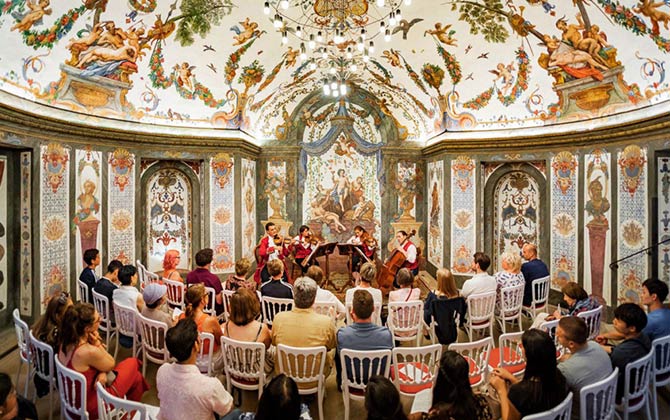 The Mozart Ensemble String Quartet plays every Wednesday, Friday and Sunday at 19:30 (7.30pm) and Saturday at 18:00 (6.00pm). The Mozart Ensemble Piano Trio plays on Tuesdays and Thursdays at 19:30 (7.30pm) and the Piano Evening takes place on Saturdays at 20:00 (8.00pm).
Additional concerts are performed at Christmas and New Year.
Tickets are available in two categories A and B. Discounted ticket prices are available for children up to the age of 14 and students with a student pass up to the age of 26 and default to category B except when bought together with regular tickets in category A.