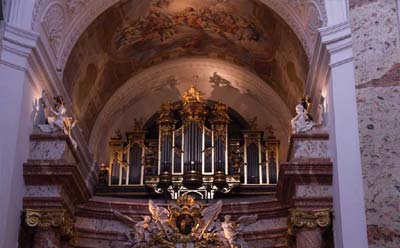 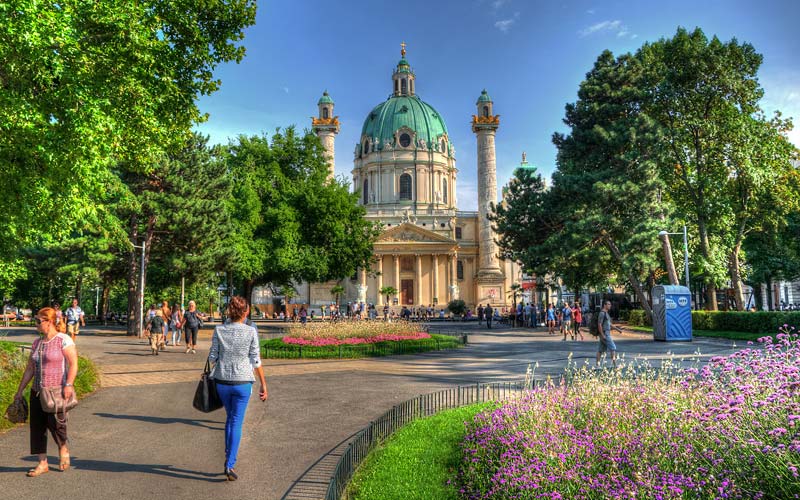 The St. Charles Church (Karlskirche) is considered architect Johann Bernhard Fischer von Erlach's greatest work. It is also a Viennese icon and an expression of the Austrian joie de vivre. 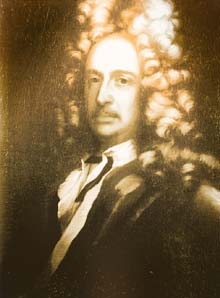 In 1713, one year after the last great plague epidemic, Charles VI, Holy Roman Emperor, pledged to build a church for his namesake patron saint, Charles Borromeo, who was revered as a healer for plague sufferers. An architectural competition was announced, in which Johann Bernhard Fischer von Erlach prevailed over, among others, Ferdinando Galli-Bibiena and Johann Lukas von Hildebrandt. Construction began in 1716. After J.B. Fischer‘s death in 1723, his son, Joseph Emanuel Fischer von Erlach, completed the construction in 1737 using partially altered plans. The church originally possessed a direct line of sight to the Hofburg.

As a creator of historic architecture, J.B. Fischer united the most diverse of elements. The façade in the center, which leads to the porch, corresponds to a Greek temple portico. The neighboring two columns, crafted by Lorenzo Mattielli, found a model in Trajan‘s Column in Rome. Next to those, two tower pavilions extend out and show the influence of the Roman baroque (Bernini and Borromini). Above the entrance, a dome rises up above a high drum, which the younger J.E. Fischer shortened and partly altered.

The iconographical program of the church originated from the imperial official Carl Gustav Heraeus and connects St. Charles Borromeo with his imperial benefactor. The relief on the pediment above the entrance with the cardinal virtues and the figure of the patron on its apex point to the motivation of the donation. This sculpture group continues onto the attic story as well. The attic is also one of the elements which the younger Fischer introduced. The columns display scenes from the life of Charles Borromeo in a spiral relief, however they also recall the Pillars of Hercules and act as symbols of imperial power. The entrance is flanked by angles from the Old and New Testaments. This continues in the interior as well, above all, the dome fresco by Johann Michael Rottmayr of Salzburg and Gaetano Fanti which displays an intercession of Charles Borromeo, supported by the Virgin Mary. The cardinal virtues surround the scene. The frescos in a number of side chapels are attributed to Daniel Gran. The high altar painting portraying the ascension of the saint was conceptualized by the elder Fischer and executed by Ferdinand Maximilian Brokoff. The altar paintings in the side chapels are by various artists, including Daniel Gran, Sebastiano Ricci, Martino Altomonte, and Jakob van Schuppen. As strong effect emanates from the directing of light and architectural grouping, in particular the arch openings of the main axis. The color scheme is characterized by marble with sparring and conscious use of gold leaf.

How to get to St. Charles Church

The subway lines U1, U2 and U4 have a station at the Karlsplatz, where the St. Charles Church is located. The tram lines #1 and #62 also have a station there.

Because of the church's close proximity to the Technical University of Vienna, the Vienna Museum and the Naschmarkt, parking spots are hard to find. Additionally the area around the Karlsplatz is a labyrinth of narrow one-way streets. The area is also a short-term parking zone (Kurzparkzone) from Monday to Friday from 9:00 to 22:00 with a maximum parking time of two hours. Prepaid parking vouchers may be purchased at tobacconists, all points of advance sale and ticket machines at all Vienna public transport underground stations, automobile clubs ARBÖ and ÖAMTC and some petrol/gas stations.

Concerts at the St. Charles Church - a musical experience on historical instruments!